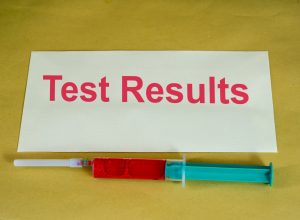 This scenario is not hypothetical:  “Joe” was my client.

Joe came to the attention of the officer because one of Joe’s headlights was out.  The officer turned around to follow Joe and reportedly observed Joe’s tire go over the lane line one time.  The ‘marked lanes’ violation was not recorded on video, although the remainder of the incident was.

The officer stopped Joe and noticed the odor of alcohol.  When asked, Joe explained he went to a wings restaurant and had a few beers with dinner.  The officer administered field sobriety tests, and Joe’s performance on the tests was good but not great.  The officer arrested Joe and took him to the police station.

A Tale Of Two Tests
At the police station, the officer asked Joe to submit to a breath alcohol test.  Joe gave a sample of his breath, and the breath-testing-machine produced a result of .069 (grams per 210 liters of breath);  under Ohio’s limit of .080.  The officer had Joe provide a urine sample because the officer had a hunch Joe smoked marijuana.

The officer’s hunch was wrong.  The urine test showed no marijuana or other drugs.  However, the urine sample was also tested for alcohol, and that test indicated an alcohol level of .138 (grams per milliliter);  over Ohio’s limit of .110.  Based on the urine test result, the officer issued Joe a ticket alleging Joe operated the vehicle with an alcohol level ‘over the limit’ (OVI ‘per se’).  The ticket did not allege Joe operated the vehicle under the influence of alcohol (OVI ‘impaired’).

Joe’s Jury
Joe hired me, and we took the case to trial.  I hoped the prosecutor would dismiss, or at least reduce, the charge without having a jury trial.  The prosecutor, however, did not see a problem with the conflicting test results.  At trial, the prosecutor essentially told the jurors they should ignore the breath test.  He argued that Joe operated a vehicle, and the urine test showed an alcohol level at or above .110, so Joe was guilty.

I asked the jurors to analyze the case more closely.  The question was whether the jurors had any (reasonable) doubt as to whether Joe operated the vehicle with a prohibited concentration of alcohol in his system.  Based on that, there were two issues which needed to be considered.  First, was the urine test result accurate, or did the disparity between the urine test and the breath test cast doubt on the accuracy of the urine test?  Second, did the evidence prove Joe’s alcohol level was over the limit at the time he operated the vehicle?

Regarding the second issue, the prosecution’s witnesses provided critical evidence.  According to the police officer, the breath test occurred about an hour after the traffic stop:  the time Joe last ‘operated’ the vehicle.  The urine sample was collected about 25 minutes after the breath test.  According to the prosecution’s ‘expert’ witness, alcohol pools in the bladder until a person urinates.  If blood/breath/urine samples were submitted and analyzed simultaneously, the breath alcohol level would be closely correlated to the blood alcohol level, but the urine alcohol level could be much higher if the subject had not urinated recently.

The jury returned a verdict of Not Guilty.  I expected this result, and I thought it was the just outcome, but I can never tell with certainty what a group of jurors will conclude.  If it were up to the prosecutor and judge, my client would have been convicted of OVI.  Thank God, and the framers of our Constitution, we have a system in which a jury of our peers decides guilt rather than a government official.