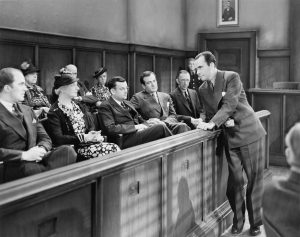 The recent case is State v. Foos.  Foos crashed his car into a concreate barrier wall.  Police officers responded to the accident scene observed that Foos seemed very intoxicated.  The officers smelled the strong odor of alcohol coming from Foos, heard Foos talking with slurred speech, and saw Foos was wearing a wrist band which appeared to be from a bar.  Foos had difficulty balancing, refused to perform field sobriety tests, and declined to take a breath test.

Foos’s friends testified that Foos only had one beer while they played pool at the bar, and Foos did not drink any alcohol while they were at the strip club.  A jury found Foos guilty of OVI, and Foos appealed to the Ninth District Court of Appeals.

The Manifest Weight Of The Evidence
On appeal, Foos argued his conviction was ‘against the manifest weight of the evidence’. For this to be a winning argument, Foos would have to convince the court of appeals the jury ‘lost its way and created such a manifest miscarriage of justice that the conviction must be reversed.’ Convictions are rarely reversed on a ‘manifest weight’ claim, and Foos’s case was no exception. The Court of Appeals upheld the conviction despite the fact Foos’s conviction was based on circumstantial evidence.

This Is Not Television
Foos’s conviction was based on circumstantial evidence. No witnesses testified he actually saw Foos operating a vehicle under the influence. Instead, the officers’ testified they observed the strong odor of alcohol, slurred speech, a bar wrist band, difficulty balancing, refusal to perform field sobriety tests, and refusal to take a breath test. Those observations were circumstantial evidence: the jury inferred from that evidence Foos was under the influence of alcohol and was in that condition when he operated (and crashed) the vehicle. The reality is nearly all OVI cases are based on circumstantial evidence.