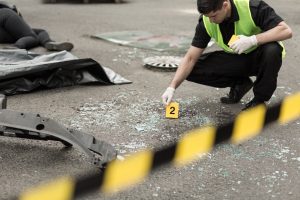 A few days before the Kansas City Chiefs were to play in the Super Bowl, assistant coach Britt Reid (son of head coach Andy Reid) was involved in a three-car accident which left a five-year-old in critical condition.  Earlier this month, Britt Reid was charged with the felony offense of ‘DWI-Serious Physical Injury’.  While this incident occurred in Missouri, the investigation which led to the charge is essentially the same as a Vehicular Assault investigation in Ohio.

If the officer observes enough ‘clues’ on the standardized field sobriety tests, the officer concludes the driver is likely ‘under the influence’ or ‘over the limit’.  In Britt Reid’s case, officers reported he did not perform well on the tests.

Drug Recognition Evaluations
Reid reportedly told officers he consumed alcohol and prescription medication before the crash.  In cases where a driver is suspected of using prescription medication or illegal drugs, officers often administer a drug recognition evaluation.  The 12-step evaluation, conducted by a ‘Drug Recognition Expert’, includes quasi-medical assessments, balancing tests, and eye tests.  The final step of the evaluation is obtaining a sample of the driver’s bodily fluids (blood and/or urine).

Testing For Alcohol/Drugs In Bodily Fluids
The driver’s bodily fluid sample(s) are sent to a forensic laboratory for testing.  Although most states test only blood, Ohio tests both blood and urine.  Using testing methods such as gas chromatography, lab technicians report the presence and quantity of alcohol and or drugs.  There is often a lengthy wait for the results of laboratory testing.  This may explain why Reid was not charged with a crime until April when the crash occurred in February.  In his case, the reported alcohol level was .113; above the prohibited concentration of .080.