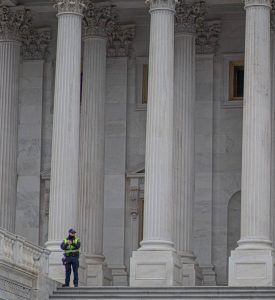 Qualified Immunity, a defense used by police officers in civil rights lawsuits, is a topic not typically discussed in this blog.  However, as a criminal defense lawyer, I have been asked about Qualified Immunity due to recent events in the United States.  In addition, an individual who files a lawsuit based on a false OVI arrest may encounter this defense.  Accordingly, I have asked attorney Eric Hollway to provide a guest article on Qualified Immunity.  Mr. Holloway, a civil rights lawyer who represents clients in false arrest claims, prepared the remainder of this article.

I.     What is qualified immunity?

Qualified immunity is a defense. It allows police officers to say they should face no civil damages for violating a constitutionally or federally protected right. It applies when one or two questions side with the police officer asserting it:

(i) did the defendant violate a constitutionally protected right?
(ii) was the right in dispute sufficiently known in case law to inform a police officer such a right existed.

Some say this makes it hard for plaintiffs to defeat qualified immunity. Litigators and courts grapple with whether a prior case is not too “general” and “specific” enough for the current lawsuit. See Kisela v. Hughes, 138 S. Ct. 1148, 1150 (2018), cites omitted.

II.     When did the Courts Create Qualified Immunity?

The Supreme Court established qualified immunity in 1974. First, though, we must know that qualified immunity is the cart before the horse. It is a defense to a claim. To what claim, some might ask? The answer is a claim under federal law, 42 U.S.C. § 1983 (§ 1983).

Congress passed what became § 1983 in 1871. It passed it to address actions by southern state officials during Reconstruction after the Civil War. Such officials systematically interfered with the civil rights of the newly freed slaves. The federal government, starting with President Ulysses S. Grant wanted to stop it.

In the late 1950’s, 13 Chicago police officers broke into Mr. Monroe’s house. They got everyone out of bed. They all stood naked in the living room. The officers searched and vandalized every room in the house. They detained Mr. Monroe for two days. They never charged him. They never brought him before a judge, only to release him without any charges. Mr. Monroe had nothing to do with a recent murder the officers were investigating.

After 1961, the judiciary faced questions about what defenses should apply in § 1983 claims. Such thoughts may have arisen considering the tumultuous 1960s.

Through it all, judges and legislators faced no liability for § 1983 claims. Unlike police officers, members of the judiciary and the legislative branch enjoy a robust defense. We call it absolute immunity. It bars lawsuits against such officials. The Supreme Court said so in several cases, include in Butz v. Economou, 438 U.S. 478, 509-10, 512 (1978).

Enter one of Ohio’s darkest days.

On May 4, 1970, a protest started in Ohio. It was on the campus of Kent State University. Event after event that day led to deadly shots fired at student protesters. A month later, Crosby, Stills, Nash & Young captured some of the grief of that day in their song, “Ohio” including the lyrics, “Four dead in Ohio.”

Survivors of those four dead students filed claims in federal court. They lost at first and took their claims to the Supreme Court. Scheuer v. Rhodes, 416 U.S. 232 (1974).

On the one hand, the Supreme Court reinstated the lawsuit against the state officials. On the other hand, it created qualified immunity. It ruled”, “a qualified immunity is available to officers of the executive branch of government….” Scheuer v. Rhodes, 416 U.S. 232, 247-48 (1974).

So, this horrible day created a set of facts that caught the attention of the Supreme Court. It caused the Court to rule on whether to apply qualified immunity for executive branch officials, which later would extend to police officers throughout America. But it took place within the mosaic of the uproar we saw in the streets in the 1960’s.

III.         How the Supreme Court Applies Qualified Immunity in the Present Day.

Some people report trouble with understanding the qualified immunity defense. On the one hand, liability cannot be based upon too general of a case holding in a prior case. On the other, it requires a prior case to be specific enough to give notice to anyone that what a defendant did violated a protected right. That is not clear to some. Yet, the Supreme Court continues to apply this standard.

Police officer Andrew Kisela arrived at a residence in Tucson, Arizona. Two other officers responded to a call. They learned that an erratic woman was at a house. She was holding a knife, using it to hack a tree at the house.

The officers encountered one woman, identified later as Sharon Chadwick, at the house. A chain link fence with a locked gate separated her from the officers. Amy Hughes then emerged from the house. She held a large knife. Ms. Chadwick said, “take it easy.” Ms. Hughes matched the description of the erratic woman.

Ms. Hughes stepped towards Ms. Chadwick. She stopped no more than 6 feet away from Ms. Chadwick. (That is important to police officers. It is well within the range most people can lunge in a split second and strike another person.) Both women were behind the chain link fence, separated from the officers.

Upon seeing Ms. Hughes’ large knife, the three officers each drew their firearms. They ordered her at least twice to drop it. Ms. Hughes remained calm, but did not talk to the officers nor anyone else. Ms. Hughes also did not drop the knife. The officers had no idea that Ms. Hughes and Ms. Chadwick were roommates.

Officer Kisela dropped to the ground to gain a clear line of fire on Ms. Hughes. He then shot at Ms. Hughes four times. The officers then jumped over the fenced, placed Ms. Hughes into handcuffs, and paramedics took her to the hospital. From the time the officers first spoke with Ms. Chadwick to the time Officer Kisela shot Ms. Hughes, less than one minute had passed. Kisela v. Hughes, 138 S. Ct. 1148, 1151 (2018).

Appling qualified immunity in Kisela, the Supreme Court first noted that police officers may not use excessive or deadly force. That is true during an arrest or any type of seizure. In support, it cited to Tennesse v. Garner, 471 U. S. 1, 11 (1985).

IV.     Should We Act to Modify the Scope of Qualified Immunity?

Whatever someone might think about qualified immunity, it is not written in stone. In fact, as a judicially created concept, Congress has the authority to change it.  Most would say we want police to protect us. Our courts’ decisions seek to protect police officers via qualified immunity. We can ask, though, if a better way exists.

One of the largest points of support for qualified immunity concerns protecting officers’ personal assets. That is an important concern.

However, most employing law enforcement agencies cover most of the costs of litigation and any civil judgments or settlements. (See Joanna C. Schwartz, Police Indemnification, 89 New York L.R. 885, 885 (2014) (“During the study period, governments paid approximately 99.98% of the dollars that plaintiffs recovered in lawsuits alleging civil rights violations by law enforcement.”) So, perhaps it is right to consider changes to qualified immunity that protect rights and protect police officers.

One approach to change the law would be to remove qualified immunity entirely. Colorado took this approach recently. It passed a law that ended qualified immunity for police officers. The new law also requires officers who acted in bad faith to pay a portion of any judgment or settlement, up to $25,000. (Source: WBUR, “How Reforming Qualified Immunity Could Transform Policing In America,” May 5, 2021, as viewed on May 6, 2021 at www.wbur.org.)

So, could Congress get rid of qualified immunity for all in a § 1983 action? The short answer is yes.

VI.     Qualified Immunity: The Next Step is Ours to Take; But What about Unintended Consequences?

Enough of us would have to conclude qualified immunity needs changes. In a representative democratic republic, the will of the people can change the law. It is a form of balance in our system of government. Many argue, though that Congress must act. The Courts have seen fit not to alter the defense except to ensure it applies still.

Any change in the law could lead to unforeseen disputes. Colorado changed its state law about qualified immunity. It bars police officers from using it from apparently state law claims only. It appears to allow other executive branch officials to use it, though.

The Colorado law tries to thread a needle and target specifically police officers. Firefighters, public social workers, prison employees, and other executive branch employees retain qualified immunity. Has this new law addressed the shortcomings in qualified immunity, or just pushed them down the road related to applicable state law claims?

Many local jurisdictions operate a department of public safety. On one side, the police force operates. On the other, the fire department operates. Some might have a separate emergency management agency, too. So, why should employees in the two other divisions enjoy qualified immunity? Is that an equal protection claim?

In § 1983 claims, qualified immunity is a robust defense. Its strength, though, is no justification alone to continue using it without legislative review.