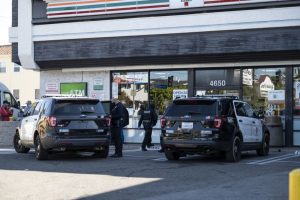 There are many different ways somebody can find themselves as the subject of an OVI/DUI investigation. The most common is when an officer witnesses a driver commit a traffic offense, initiates a traffic stop, and then conducts an investigation based on their observations of the driver. Other times, an officer will conduct the traffic stop after receiving a tip from someone that a particular driver may be impaired. How precise do these tips need to be to justify a traffic stop? How much corroborating evidence does an officer need to corroborate the tip? The Ohio Supreme Court recently weighed in on these questions in State v. Tidwell.

“That Lady is Drunk”
We have been following the Tidwell case as its worked its way through the courts. A state highway patrol trooper was investigating a fender-bender in a gas station parking lot when an unidentified customer walked out of the building and shouted “Hey, you need to stop that vehicle. That lady is drunk.” The trooper watched as the driver backed out of the parking space at what he described as “an unusually slow speed”. The trooper also observed the driver had a blank stare on her face.

Based only on the shouted tip and his minimal observations, the trooper walked in front of the car and gestured for Tidwell to stop. He then asked her to turn off the vehicle and hand him the keys. During this conversation, the trooper observed the odor of alcohol. Another officer arrived on the scene and ultimately conducted an OVI/DUI investigation that resulted in Tidwell’s arrest.

Tidwell filed a motion to suppress evidence, arguing the trooper lacked justification to conduct the initial traffic stop. The trial court granted that motion, and the First District Court of Appeals upheld that decision. The state appealed to the Ohio Supreme Court.

Reliability of Information Tips
The Ohio Supreme Court began its analysis by discussing the three types of informant tips that typically form the basis for a traffic stop: anonymous tips, identified citizen tips, and tips from known informants. The last category rarely applies in OVI situations. Instead, courts have evaluated tips from identified citizens and anonymous tipsters.

When courts evaluate informant tips, the courts determine whether the tip is reliable enough to justify a stop. Courts have reasoned that tips from anonymous informants are typically less reliable than those given by an identified citizen and therefore require some independent police corroboration.

“Rather than attempt to force the Speedway customer into one of the categories, we determine the reasonableness of this investigatory stop by considering the totality of the circumstances as they were known to Sergeant Illanz prior to the time he stopped Tidwell, together with reasonable inferences that could be drawn from the circumstances, keeping in mind that each piece of information may vary greatly in its value and degree of reliability.”

Rather than adhere to the three categories approach used up to this point by Ohio courts, the Ohio Supreme Court decided to use a ‘totality of the circumstances’ test to determine if the trooper had a reasonable suspicion that Tidwell was operating a vehicle under the influence.  Such a reasonable suspicion would justify the traffic stop.

The Court reasoned that, since the tip was communicated contemporaneously with the alleged crime’s occurrence and was given in a “face-to-face” manner, it should be afforded a higher degree of reliability than a typical anonymous tip. Based on this reasoning and the trooper’s observation of Tidwell slowly backing out of her parking space with a blank stare on her face, the justices unanimously agreed that it was a valid traffic stop.

What the Future Holds
It is much too early to know what effect this decision will have on OVI/DUI cases going forward.  However, it is easy to see how lowering the reliability bar for informant tips could lead to an increase in ‘valid’ tipster-based stops that would have previously been held to violate the Fourth Amendment.  Drunk driving in Ohio is a problem which needs to be addressed, but it seems unwise to do so by stripping-away the personal liberties enshrined in the Bill of Rights.