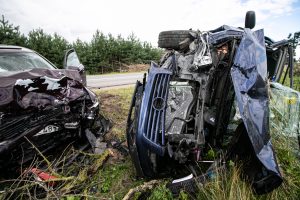 One act can result in both a criminal case and a civil case.  A well-known example of this principle is the O.J. Simpson cases.  Simpson was found Not Guilty of murder in the criminal case, but he was found liable for wrongful death in the civil case and ordered to pay $8.5 million to the Goldman family.  A recent case involving a fatal wreck demonstrates how this principle applies to Ohio cases involving Vehicular Homicide and Vehicular Assault.

According to the Greenville News, Nathaniel Hawthorne was stopped for a traffic violation by a state trooper.  Hawthorne was speaking with the trooper when a car driven by Allan Zack struck the trooper’s vehicle.  The collision knocked Hawthorne into the path of traffic, and Hawthorne was killed.  Zack was charged with multiple offenses, including felony DUI resulting in great bodily injury (called Aggravated Vehicular Homicide in Ohio).  In addition to the criminal offenses, Zack was also sued by Hawthorne’s mother.  The criminal case and the civil case were pursued simultaneously.

In a criminal case, the plaintiff is the government (e.g., the State of Ohio).  The government claims the defendant violated a statute:  a written law enacted by the legislature.  In a case like the one described above, the State of Ohio would prosecute the defendant for violating the Aggravated Vehicular Homicide statute, which prohibits causing the death of another person by operating a vehicle recklessly or under the influence of alcohol and/or drugs.

The Rules in Criminal Cases and Civil Cases
In a civil case, the plaintiff claims the defendant committed a tort.  A tort is a wrongful act by one person which causes harm to another person.  In Ohio, when a plaintiff sues a defendant for committing a tort, the case is governed by the Ohio Rules of Civil Procedure.  The plaintiff must prove the defendant’s negligence by a preponderance of the evidence, which means it is more likely than not the defendant breached a legal duty causing harm to the plaintiff.