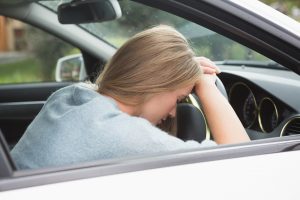 
The Hope Solo Incident
According to an ESPN article, someone saw Solo in a shopping center parking lot.  Solo was reportedly passed out behind the wheel of her vehicle for over an hour, and there were two young children in the back seat.  An officer responded to the scene and smelled alcohol.  Solo refused field sobriety tests, and her blood was drawn for forensic testing.  Test results have not been made public at this time.  Solo was charged with DWI and Child Abuse, as well as Resisting a Public Officer.  She has a court appearance scheduled for June 28.

OVI and Child Endangering in Ohio
When a law enforcement officer suspects a driver is under the influence of alcohol and/or drugs, the officer typically administers field sobriety tests at the scene.  In Hope Solo’s case, she reportedly refused to perform those tests.  After the field sobriety tests, or a refusal to perform them, the officer decides whether to arrest the driver.

Potential Consequences in Ohio
If a driver is convicted of both OVI and Child Endangering, the driver may be subjected to penalties for both charges.  For a first-offense OVI, the penalties include incarceration between three days and six months, a driver license suspension for one year to three years, and a fine of $375 to $1,075.  OVI penalties increase if the driver has prior OVI convictions.

A driver charged with OVI and Child Endangering may also have a case filed in the juvenile court.  Law enforcement officers in Ohio are ‘mandated reporters’ of child abuse.  An officer who arrests a driver for OVI and Child Endangering reports the incident to the Ohio Department of Job and Family Services or the local Children Services agency.  The agency may then file a complaint in the juvenile court alleging Abuse/Neglect/Dependency.  An adjudication of abuse/neglect/dependency can result in the parent completing a case plan and can even result in the child being removed from the home.

Additional Charge Raises Stakes
Ohio permits cumulative penalties for Child Endangering and OVI because driving under the influence with children in the vehicle creates a specific risk of harm to the children, in addition to the general risk of harm to motorists, pedestrians, and property.  When a driver is charged with both OVI and Child Endangering, the stakes are raised.  A driver in that position would benefit from representation by an effective OVI defense lawyer.