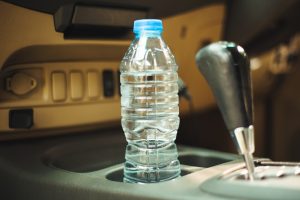 Ohio may need a new acronym for impaired driving.  Our state has used various drunk driving abbreviations in the past.  There was ‘DUI’ for Driving Under the Influence and then ‘OMVI’ for Operating a Motor Vehicle Intoxicated.  Now that Ohio law does not require the vehicle to be motorized, we use ‘OVI’ for Operating a Vehicle under the Influence.  In the future, the acronym may be ‘OVD’ for Operating a Vehicle Dehydrated.  A study published in Physiology & Behavior suggests dehydrated driving is similar to intoxicated driving.

Symptoms of Dehydration
The report from the study observes that mild dehydration, “can cause symptoms such as headache, weakness, dizziness, and fatigue”.  The report further notes, “Insufficient hydration can also result in impaired cognitive function, with changes in mood state and modest reductions in concentration, alertness and short-term memory.”  Could those symptoms impair driving ability?

Dehydrated Driving Simulator Sessions
That question was asked by scientists who designed an experiment to determine the effect of hypohydration (dehydration) on driving performance.  Study subjects took a two-hour drive in a driving simulator on three separate occasions.  The first session was used for the subjects to become familiar with the simulator.  The subjects were adequately hydrated during the second session and mildly dehydrated during the third session.  During the second and third sessions, the subjects’ faces were video-recorded wile electronic devices recorded brain activity, heart rate, and driving errors.

Dehydration Effects are Similar to Intoxication
The results of the study showed mild dehydration produced a significant increase in driving errors.  The most common errors were lane drifting and late braking.  The rate of driving errors caused by dehydration were similar to driver error rates for subjects with a blood alcohol concentration of .08% (the ‘legal limit’ in Ohio).

Public Policy Problems
The conclusion of the study seems rational.  Dehydration and alcohol intoxication share common symptoms, such as impaired cognitive functioning and decreased alertness.  Those symptoms lead to slowed reactions and poor coordination, which cause driving errors like lane drifting and late braking.  Those symptoms are also found in drowsy driving and distracted driving.

Driving impairment caused by factors other than alcohol and drugs present complicated policy implications.  The scientists who conducted the study recommend that driver education programs encourage appropriate hydration practices. But should we go further?  Should Ohio enact a law prohibiting dehydrated driving?  Should a violation be punished the same as OVI?  How would hydration be measured?  Would there be a new special interest group – FADD (Fathers Against Dehydrated Driving)?  The last question is asked in jest, but the others raise legitimate issues.  Given the complexity of those issues, I expect we will not see laws prohibiting dehydrated driving in my lifetime.