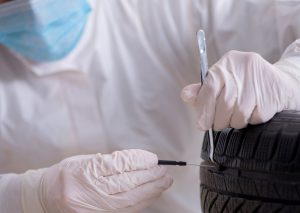 Accident Reconstruction Testimony Introduced at Trial
The case is State v. Davis.  Davis lost control of her vehicle and was ejected.  The vehicle went over the side of an exit ramp and landed on another vehicle.  The driver and passenger in the second vehicle were killed.  Davis was charged with two counts of Aggravated Vehicular Homicide.

Davis’s attorney brought to the judge’s attention the officer’s testimony sounded like expert testimony, but the attorney did not actually object to the testimony.  Davis was found guilty and appealed her conviction to Ohio’s First District Court of Appeals.

Appellate Court Excludes Accident Reconstruction Testimony
On appeal, Davis argued that her attorney provided ineffective assistance of counsel by not objecting to the officer’s testimony regarding the accident reconstruction.  The officer had not provided an expert witness report.  The prosecution conceded the officer gave expert testimony and did not provide an expert witness report.  However, the prosecution argued, most of the officer’s testimony was that of a lay witness.

The Court of Appeals disagreed with the prosecution.  The Court noted that the officer’s testimony began with him explaining he was an accident reconstructionist with over 500 hours of experience.  The Court further observed the officer, “collected data, drew inferences from the data, and offered his expert opinion as to the cause of the accident”.

The failure of Davis’s attorney to object to the officer’s inadmissible testimony was ineffective assistance of counsel.  Precedent in this area holds the failure to object to the admission of expert testimony cannot be excused as trial strategy, so the attorney’s performance was deficient.  The attorney’s deficient performance was prejudicial to Davis, as the admission of the inadmissible expert testimony undermined confidence in the outcome of the trial.  Accordingly, the Court held Davis was denied the effective assistance of counsel and remanded the case for a new trial.

Expert Testimony Must Be Challenged
The Davis case illustrates the weight expert testimony may carry with a jury.  Because a jury may be persuaded by the testimony of an expert, it is important that the procedural rules for experts be followed.  It is also critical that defense attorneys object to inadmissible expert testimony and effectively cross-examine experts when their testimony is admissible.  This is particularly true when a client is facing the serious consequences associated with charges of Vehicular Homicide.