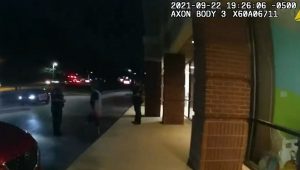 Imagine you are totally sober, but your child’s daycare calls the police and reports you may be intoxicated.  Imagine further the police make you perform field sobriety tests while your toddler is running around on the sidewalk.  Now imagine you are prosecuted for DUI (called ‘OVI’ in Ohio) and Child Endangering and your child is taken away from you for two months, only for a blood test to show no alcohol or drugs, because you were totally sober.  Katie Slayton does not have to imagine it:  it happened to her.  Her experience was the perfect storm of circumstances in a DUI/OVI investigation.

It Started With A Call to the Police
Slayton is an overworked nurse.  According to WSMV4 in Tennessee, she had worked 41 hours in three days, caring for COVID patients.  When she picked up her son at daycare, one of the workers called the police and reported that Slayton seemed “off”; scratching her head and talking to herself.

As Slayton pulled out of the parking space, the cruiser lights came on.  Police officers asked if she was drunk, and she told them she was not.  The officers did not observe any problems with Slayton’s driving and did not observe the odor of alcohol.  They reportedly observed her speech and mannerisms were slow.  Based on that and the daycare worker’s report, the officers removed Slayton from the vehicle.

It Continued With Sobriety Testing
The officers began field sobriety testing.  During the testing, Slayton’s child was running up and down the sidewalk.  An officer took the child into the daycare, with the child screaming and crying.  Under those conditions, coupled with sleep deprivation, Slayton performed poorly on the tests.

It Culminated in a Prosecution
Following the field sobriety tests, the officers arrested Slayton and took her to a hospital for a blood draw.  The officers then took her to jail.  Slayton was charged with DUI and felony Child Endangering.  Slayton’s son was placed in the custody of Children Services, where he would remain for nine weeks.

Until the Blood Test Cleared Her
Six months after the arrest, the blood test results were received.  The results showed there was no alcohol and no illegal drugs in Slayton’s blood.  The only drug in Slayton’s blood was Adderall, which she took for ADHD, according to a prescription.  The charges were finally dropped.

The Perfect Storm
How does this happen?  This was the perfect storm of an inconclusive eyewitness report, fatigue, nervousness/stress, the limitations of sobriety testing, and jumping to conclusions.  The eyewitness report did not indicate Slayton was intoxicated; it merely said she seemed “off” because she was scratching her head and talking to herself.  Fatigue, which Slayton was likely experiencing from her grueling work schedule, can have symptoms which mimic intoxication.  In fact, the CDC has indicated fatigue can impair driving ability the same way as drinking too much alcohol.

Field sobriety tests are intended to predict whether a person’s blood alcohol concentration is over .08%, but the tests have their limitations.  Test performance could certainly be impacted by the stress of watching your crying child taken away.  Despite those limitations and circumstances, the officers jumped to the conclusion Slayton was intoxicated, even though they did not smell the odor of alcohol, did not observe bad driving, and did not observe other expected signs of intoxication.

This perfect storm resulted in false allegations of DUI and Child Endangering.  Thankfully, Slayton obtained the services of a DUI lawyer and was cleared of the allegations.  The dismissal of the case, however, does not reverse the trauma experienced by Slayton and her son.