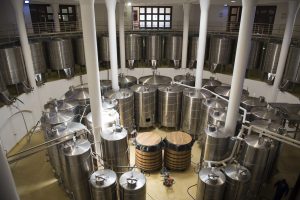 A semi rolled-over and spilled about 11,000 salmon onto the highway. As the fish flopped around on the road, the truck driver was charged with DUI. But it turned-out he had ‘auto-brewery syndrome’, a condition in which his body makes its own alcohol. This condition is rare but has been identified many times. For a person charged with DUI (called ‘OVI’ in Ohio) who drank no alcohol, auto-brewery syndrome may be responsible.

How Alcohol Is Produced In The Human Body
When sugar is combined with yeast, the process of fermentation produces ethanol (alcohol) and carbon dioxide. We often ingest sugar (probably too much for most of us), and carbohydrates are metabolized into sugar (glucose), so sugar is typically present in our bodies. Yeast is also typically present in our bodies: we ingest it in foods, and at least one type of yeast (candida) lives inside our bodies.

Because our bodies contain sugar and yeast, we all have the capacity for fermentation to occur. Ordinarily, however the fermentation does not take place. It seems that fermentation occurs when there are unusually high levels of yeast. Yeast levels often increase when people take antibiotics or have weakened immune systems.

Auto-Brewery Syndrome Can Also Lead To DUI Charges
A man in Ohio was charged with DUI, his blood alcohol level was .200, and officers disbelieved him when he denied alcohol ingestion. Doctors determined there was a high level of yeast in his digestive system, likely caused by his use of antibiotics. He was treated with anti-fungal therapy and probiotics, and his yeast level was significantly reduced. It is unclear how his DUI case was resolved.

While auto-brewery syndrome is not a common condition, it is reported to be under-diagnosed. The strategic use of this condition as a defense to OVI may also be uncommon, but this article highlights the importance of hiring DUI/OVI lawyers familiar with OVI defenses, even those which are uncommon.