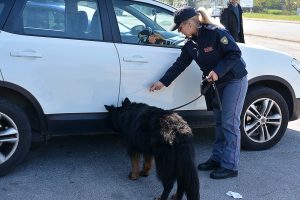 In my experience as a criminal defense attorney, I have seen countless cases which began as simple traffic stops but escalated quickly into something far more complicated. Those more complicated cases often result from the officer searching my client’s vehicle and finding something illegal. Frequently, the officer’s search is based on the driver’s consent to the search. But what if the officer asks to search the vehicle and the driver doesn’t explicitly say yes or no? This question was answered in a recent appellate decision, and the answer can impact Ohio DUI/OVI cases.

Consent Is An Exception To The Search Warrant Requirement
The Fourth Amendment protects us from unreasonable searches conducted by the government. Many people know that this means the police need a warrant to search their house and sometimes their car. However, there are situations in which a search can be conducted without a warrant and still be valid under the Fourth Amendment. Once of these situations is when someone consents to the search. Essentially, the officer asks if they can search the vehicle and the driver says yes.

Is Equivocal Consent Sufficient?
The 6th District Court of Appeals recently dealt with this situation in State v. Casi. In that case, an Ohio State Highway Patrol trooper pulled over a driver for driving five miles per hour under the speed limit and following a truck too closely. The trooper reportedly suspected the driver was transporting drugs. (In a semi-unrelated note, the decision is worth reading to see the kinds of seemingly innocent behavior officers can interpret as indications of criminal conduct. Some of the factors considered suspicious by the trooper included the driver wearing a rosary and the driver being too compliant with the trooper).

After making the traffic stop, the trooper had a drug dog circle the car, and the dog gave no indication that there were drugs present. Multiple troopers were present and asked the driver multiple times for permission to search her vehicle. The troopers’ questions were phrased in ways such as, “You don’t have a problem with me searching your car, right?” The driver responded that she didn’t have anything to hide, and the dog did find anything. One of the troopers testified at a suppression hearing that she may have nodded during one of her responses.

The troopers decided the driver had consented to the search and began to look through her car. The troopers ultimately found a large amount of drugs in a hidden compartment. The defendant was charged with multiple felonies and filed a motion to suppress the results of the search on several grounds, one of which was that she did not consent to the search. The trial court denied that motion, and the defendant filed an appeal.

Consent Searches And DUI/OVI
What does this mean for someone pulled over by the police? It means consenting to a search can convert a simple traffic stop to a more serious charge. For example, something as simple as an empty beer can thrown in the back of a car after a camping trip can turn a simple speeding citation into a full-blown DUI/OVI Investigation.

This is just one example of how a simple traffic stop could turn into a much larger problem. What may look to you like trash collected when leaving a campsite may look to an officer like evidence of DUI/OVI. Because situations like this occur regularly, it is important to know your rights when interacting with the police. If a scenario like this leads to a DUI/OVI charge, it is important to hire criminal defense attorneys who understand search and seizure law and how it impacts DUI/OVI cases.