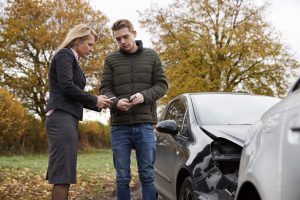 Almost everyone will be involved in a car accident at some point in their lives. When a collision occurs, your first concern is probably safety.  The last thing going through your mind is what exactly the law requires you to do after the accident. Failing to take the many steps required by Ohio law can result in a charge of leaving the scene of an accident, more commonly referred to as hit-skip. These charges can result in a license suspension, a jail term, driver license points, and a hefty fine. The penalties are so harsh partly because prosecutors and judges assume a hit-skip driver was probably guilty of drunk driving (called OVI in Ohio). So how strictly must the law be followed? The Ohio Supreme Court recently issued a decision which addresses this question.

Like many issues in the law, reading the statute can raise more questions than it answers. For instance, what is the registered number of a vehicle? The license plate number? The VIN? The statute requires a driver to provide their information to the officer on the scene. What if the police aren’t called? What if the police are called after you’ve already exchanged information with the other driver and left the scene?

Driver Challenges Hit-Skip Conviction
The recent decision in State v. Bryant answers some of these questions. Two motorists were involved in an accident. Bryant, the at fault driver, asked the other driver not to call the police (for some admittedly not-great reasons). The two drivers spoke for about an hour, exchanged information and Bryant allowed the other driver to photograph his license plate number. After their conversation, Bryant left the scene, and the other driver returned to her car to call a tow truck and the police. As a result, Bryant was charged with leaving the scene of an accident (hit-skip) and several other traffic offenses.

Bryant was convicted of Hit-Skip and appealed on the grounds that he complied with the requirements to provide information in the statute, as he was unaware the police had been called, and that his license plate number satisfied the “registered number” requirement. The First District Court of Appeals upheld his conviction, and Bryant appealed to the Ohio Supreme Court.

Ohio Supreme Court Overturns Hit-Skip Conviction
The Ohio Supreme Court reversed the First District’s ruling. The State of Ohio argued that the Hit-Skip statute requires a driver to provide their information to all of the parties listed, which includes the officer on the scene. Bryant argued that he was unaware the police had been called and therefore had no duty to wait for them to appear.

The Supreme Court agreed with Bryant’s argument. The Court observed the statute explicitly requires drivers to alert the police and wait for their arrival when the accident results in an injury but does not have this requirement for non-injury accidents. In a situation where the police are not called or, as was the case here, the driver is unaware the police were called, the driver is not required to provide information to the police.

Complicated Traffic Laws Require Legal Expertise
This case is just one example of how a complicated law can make an already stressful situation worse. If you’re involved in an accident you may think that you’ve done everything you were supposed to, only to later be charged with a serious offense. If you find yourself in that situation, it’s important to find attorneys who have expertise with serious traffic offenses to help you navigate that complexities of the legal system.