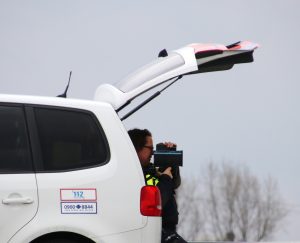 Technological devices are used to measure both speed and breath alcohol concentration. In court, the results of those devices are introduced to prove defendants are guilty of speeding or DUI (called ‘OVI’ in Ohio). As the government has the burden of proving a defendant’s guilt, one would expect the government would have the obligation to prove the measurement device produced an accurate result. A recent decision of the Ohio Supreme Court permits judges and juries to presume the measurement devices are accurate.

No Expert Testimony Or Judicial Notice
The case is Brook Park v. Rodojev. A police officer measured Rodojev’s speed with an LTI 20/20 laser device and determined Rodojev was driving 15 mph over the posted speed limit. Rodojev was cited for Speed, plead not guilty, and took the case to trial. At the trial, the judge admitted into evidence the results of the laser device. There was no expert testimony establishing the reliability of the device, and the judge did not take judicial notice of the device’s reliability. Rodojev was convicted, his conviction was affirmed by the Eighth District Court of Appeals, and Rodojev appealed to the Ohio Supreme Court.

The Ohio Supreme Court determined there were conflicting decisions in the appellate courts and accepted the case to answer the following question: “Whether the results of any speed measuring device, using either radar or laser technology, [are] admissible without expert testimony establishing, or the taking of judicial notice of, the scientific reliability of the principles underlying that technology.”

Expert Testimony And Judicial Notice Not Required
The Court answered in the affirmative. The Court cited E. Cleveland v. Ferrell, a case from 1958 which held the results of radar speed-measuring devices are admissible without expert testimony. In Ferrell, the Court took judicial notice of the reliability of the scientific principles underlying stationary radar speed measurement. In Rodojev, the Court went further by holding the results of moving radar speed measurement devices are admissible without expert testimony.

The Rodojev Court then addressed speed measurement by laser. The court concluded the scientific principles underlying laser speed-measurement devices are sufficiently reliable. Consequently, the Court held the results of laser speed-measurement devices are admissible in Ohio courts without expert testimony establishing their reliability and without taking judicial notice of the scientific principles underlying that technology.

The Court’s opinion in Rodojev leaves room for challenging the accuracy of speed measurements at trial. The Court stated,

Other substantive challenges to the results of a laser speed measuring device—including challenges involving the angle at which the officer held the device in relation to the targeted vehicle, the device’s accuracy-validation algorithms, the device’s calibration and maintenance schedule, and the officer’s qualifications to use the device—implicate the sufficiency and weight of the evidence, not its admissibility.

The dissenting opinion disagreed with the reasoning and conclusion of the majority opinion. The dissent pointed-out that E. Cleveland v. Ferrell was decided in 1958, before the adoption of the Ohio Rules of Evidence and leading case law such as Daubert v. Merrell Dow Pharmaceuticals and Miller v. Bike Athletic Co. The dissent also noted the majority parted with precedent which required expert testimony or judicial notice for particular speed-measuring devices.

This Decision Applies To Ohio OVI Cases
The Court’s decision in Rodojev relieves the government of its burden of proving that speed-measurement devices are reliable. The result is identical to the result in State v. Vega, which held defendants cannot make a general attack on the reliability of a breath-testing machine.

The saving grace of Rodojev is it acknowledges the defendant’s right to challenge the accuracy of the device at trial. Defendants can still argue the device did not produce an accurate result in a particular case due to circumstances affecting the result’s accuracy.