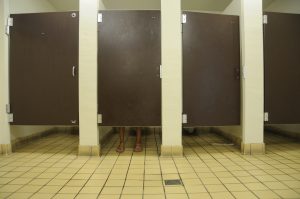 Most police officers probably do not go to work hoping to witness a suspect provide a urine sample. It’s likely not one of those things they go home and share with their family and friends. But it’s one of those things Ohio law requires in OVI cases. If a suspect is arrested and asked to provide a urine sample, an Ohio Department of Health regulation states, “The collection of the urine specimen must be witnessed”. The precise meaning of “witnessed” was the subject of a recent case in an Ohio court of appeals.

The case is State v. Woltz. The defendant, Woltz, was arrested for OVI and taken to a police station. At the station, Woltz was asked to submit to a urine test, and she consented. The defendant was a female, and the arresting officer was a male. Accordingly, the officer asked a female dispatcher to witness the collection of the urine specimen. The urine specimen was given to the officer and sent to a crime lab. The crime lab analyzed the urine specimen and determined it contained marijuana, cocaine, and MDMA. Woltz was charged with OVI.

The court of appeals took a different view of whether the urine sample was witnessed. The court clarified the distinction between the requirement of being “witnessed” in the Ohio Department of Health regulation and the requirement of “authentication” in the Ohio Rules of Evidence. The court pointed out that the prosecution needs to prove substantial compliance with the Ohio Department of Health regulation, not strict compliance. The court concluded the officer’s testimony, even without the testimony of the female dispatcher, was sufficient to prove substantial compliance with the regulation’s requirement that the urine sample be “witnessed”.

I agree with the court of appeals that the trial judge and defense lawyer may have confused the concepts of regulatory compliance and authentication. However, I think that’s due to the language of the Ohio Department of Health regulation. The regulation, OAC section 3701-53-05, says, “The collection of the urine specimen must be witnessed to assure that the sample can be authenticated”.

Once that confusion is clarified, I think this case is a close call, and my conclusion is different than that of the appellate court. Although the officer testified the female dispatcher was in the women’s restroom at the time the defendant provided the urine sample, the officer did not testify regarding what actually went on in the restroom. Was this a one-toilet restroom with no stalls, or were there stalls with doors which prevented the dispatcher from actually observing the defendant? Did the dispatcher actually pay attention to the defendant, or was the dispatcher on her phone checking for likes on her recent FaceBook post?

I acknowledge my questions seem really picky. On the other hand, it’s important to a free democratic society to have people keeping the government honest. Some of those people are criminal defense lawyers. The government created the regulation. If the government creates the rules, it needs to follow them. The government could easily re-write the rules if it didn’t really mean “witness”.  Even easier: the prosecution could just have the dispatcher testify.