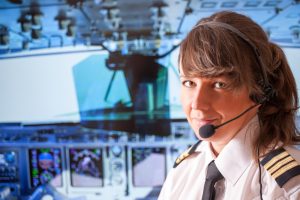 After years of working as a first officer for a commercial airline, Andrea is finally about to become a captain. To celebrate, she goes to dinner with friends and has a couple drinks. On the way home, she forgets to signal a right turn, and an officer stops her. The officer smells alcohol and has Andrea perform field sobriety tests. The officer says he notices ‘clues’ on the tests and arrests Andrea for DUI (called OVI in Ohio). As the cuffs go on, all she can think about is what will happen to her pilot’s license and her career.

Legal Turbulence For The Pilot And Her Attorney
It seems logical that a pilot’s license would only be jeopardized if the pilot is convicted of OVI. What makes sense logically is not always what occurs with the federal government. And it is the federal government, specifically the Federal Aviation Administration (FAA), which has responsibility for pilot (“airman”) licenses. The FAA will, in fact, impose sanctions for an OVI conviction. But there are other infractions, not obvious to attorneys, for which pilots could crash and burn.

There are questions on the medical application related to DUI / OVI. A pilot is asked about and required to report convictions or arrests or administrative actions:

The FAA will know about events which trigger reporting requirements. When a pilot signs the medical application, the pilot authorizes the FAA to obtain the pilot’s driving record from the National Driver Register. Falsifying a medical application will lead to sanctions.

The pilot will also likely have reporting requirements and potential discipline with her employer. Accordingly, the pilot should consult employment contracts, employee handbooks, and collective bargaining agreements to address the employer issues.

And Then There’s The Court Case
While this article addresses the FAA requirements, the pilot also must defend against the OVI charges in court. For a pilot charged with DUI / OVI in Ohio, navigating the court system and the federal regulations can be tricky maneuvers. To avoid a crash landing, the pilot needs to effectively defend against the DUI/OVI and fully comply with FAA requirements. The pilot should hire a lawyer with expertise in Ohio DUI / OVI defense and a grasp of the special requirements for an ‘airman’ facing DUI / OVI accusations.