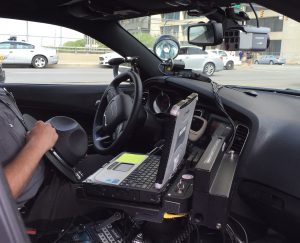 The case is State ex rel Cincinnati Enquirer v. Ohio Department of Public Safety. In that case, two cruisers from the Ohio State Highway Patrol were involved in a pursuit. The pursuit ended with the suspect crashing into a guardrail and being arrested. The suspect was charged with multiple felony offenses, including Fleeing And Eluding and Carrying a Concealed Weapon.

The Cincinnati Enquirer made a public records request for the ‘dash cam’ video from the two cruisers. The Ohio State Highway Patrol declined to provide the videos, claiming the videos were not subject to public records requests because the videos were confidential law enforcement investigatory records. The Enquirer filed a lawsuit with the Ohio Supreme Court asking the Court to issue a writ of mandamus ordering the Highway Patrol to provide the cruiser videos.

The Ohio Supreme Court issued a decision on December 6, 2016. The Court explained Ohio’s Public Records Act, Ohio Revised Code section 149.43, is premised on the idea that “public records are the people’s records, and that the officials in whose custody they happen to be are merely trustees for the people.” Accordingly, public records are to be promptly prepared and made available for inspection when requested.

The opinion made clear that cruiser videos are public records. The Court observed the Ohio State Highway Patrol is a ‘public office’, and a cruiser video is a record because it is an item “created or received by or coming under the jurisdiction of any public office of the state ore its political subdivisions, which serves to document the organization, functions, policies, decisions, procedures, operations, or other activities of the office.” The Court stated the definition of ‘record’ encompasses “almost all documents memorializing the activities of a public office, unless otherwise exempt.”

‘Otherwise exempt’ was the argument made by the Highway Patrol. The Highway Patrol took the position cruiser videos are exempt from disclosure as public records because the videos are ‘confidential law enforcement investigatory records’.

For me, the great irony highlighted by this case is the news media obtains cruiser video very quickly while DUI lawyers often wait weeks to obtain the same videos from the prosecution in the discovery process. The wheels of justice turn slowly…unless the subject matter makes a good headline.