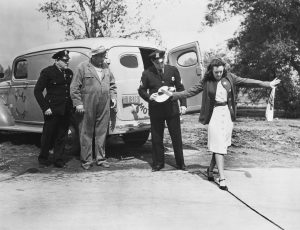 The San Diego Study Makes It Crystal Clear
One of the most recent validation studies was conducted in San Diego in 1998. The San Diego study examined the validity of SFSTs for predicting BACs below .10. The report from that study clarifies this common misconception on pages 27-28:

Many individuals, including some judges, believe that the purpose of a field sobriety test is to measure driving impairment. For this reason, they tend to expect tests to possess “face validity,” that is, tests that appear to be related to actual driving tasks. Tests of physical and cognitive abilities, such as balance, reaction time, and information processing, have face validity, to varying degrees, based on the involvement of these abilities in driving tasks; that is, the tests seem to be relevant “on the face of it.” Horizontal gaze nystagmus lacks face validity because it does not appear to be linked to the requirements of driving a motor vehicle. The reasoning is correct, but it is based on the incorrect assumption that field sobriety tests are designed to measure driving impairment.

Despite The Clarity, The Misconception Continues
Just like the well-intentioned judge in my recent trial, many criminal justice professionals misunderstand the designed purpose of SFTs. Most lawyers and judges have not read the NHTSA studies but have read (at least parts of) the NHTSA manuals. The problem is the NHTSA manuals contain sloppy writing. In various parts of the NHTSA manuals, the writers use “impairment” as though it is synonymous with a BAC over .08. The two are not synonymous. In some places, the manuals contain conspicuous implications the SFSTs measure driving impairment. This is inaccurate writing on the part of the manuals’ authors, but it’s apparently good enough for government work.

I am not in favor of people driving under the influence of alcohol. I am, however, in favor of having a fair process to determine whether a person is guilty of doing so. Allowing the government to mislead jurors about SFSTs makes the process unfair.