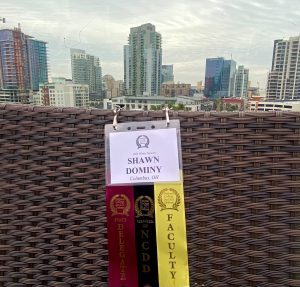 Representing clients charged with Vehicular Homicide in Ohio is challenging.  Our firm does it very well, but there is always room for improvement.  That’s why I recently attended the NCDD seminar ‘Facing Death’.  Held in San Diego, the two-day conference featured outstanding lawyers and experts discussing how to effectively defend clients facing these charges.

Law, Science, Art, and Economics
Vehicular Homicide cases have several components:  legal, scientific, artistic, and economic.  The legal element includes constitutional and statutory matters.  The scientific areas include accident reconstruction, alcohol and drug testing, and forensic pathology.  The artistic aspect is how to present a case to a jury or judge.  The economic issues include restitution, civil liability, and insurance.

L.A. Law
Legal issues were discussed by two Los Angeles area lawyers.  Virginia Landry addressed the most difficult stage of these trials:  jury selection.  She offered wise advice about emotional sensitivity in conversations with potential jurors and preparing for the shock of horrifying evidence.  Lara Gressley taught about pretrial litigation.  That litigation often involves motions to suppress evidence based on the Fourth, Fifth, and Sixth Amendments, as well as arguments regarding the admissibility of expert testimony.

CSI: San Diego
Expert testimony is always a part of Vehicular Homicide cases, and these matters have trials which somewhat resemble the fictional CSI shows.  The expert witnesses include coroners, toxicologists, accident reconstructionists, and other forensic scientists.  The seminar addressed each of these disciplines.

Isomers in Stereo
One particularly interesting topic, presented by Amanda Riek and David Bolles, was about chiral molecules.  Molecules are chiral if they are mirror images but cannot be superimposed on one another.  A relevant example is the isomers of methamphetamine.  D-methamphetamine and L-methamphetamine have the same elements in the same proportions, but the atoms are arranged differently.

Special Speaker
The keynote speaker was Mark Richards, the lead defense attorney for Kyle Rittenhouse.  The Rittenhouse case was polarizing and arguably the highest profile criminal matter since the trial of O.J. Simpson.  Although the Rittenhouse case was not a vehicular homicide, it involved death, law, science, and the art of lawyering.  After hearing the media reports about the case, it was enlightening to hear directly from Richards about the evidence, the strategy, and his commitment to his controversial client.

Inspiration
I have learned about litigating vehicular homicide cases over the last two decades, and I learned a little more over the two days of this seminar.  Seminars like this are inspiring.  Like Jack Nicholson said to Diane Keaton in the movie ‘As Good as it Gets’, “You make me want to be a better man lawyer.”