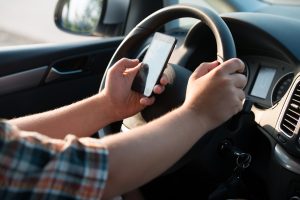 How many times have you seen someone obviously texting while driving?  I recently drove by a guy who was operating his phone with both hands while he steered his car with his knees.  I’m sensitive to the danger posed by distracted driving, both as a lawyer who represents clients charged with traffic offenses and as a father of a child approaching driving age.  The more we learn about the danger of distracted driving, the more we understand it may be as hazardous as drunk driving.  Consequently, driving while texting may someday carry penalties like those for DUI (known as OVI in Ohio).

Matt Richtel‘s recent article in the New York Times presents a good discussion of this issue.  According to the article, the problem of driving while distracted by a cell phone is getting worse.  Surveys show Americans not only continue to text but also take selfies, use Snapchat and post on Facebook while driving.  According to the National Highway Traffic Safety Association (NHTSA), 3,477 people in the United States were killed by distracted driving in 2015, and another 391,000 were injured.  NHSTA chief Mark Rosekind says it’s increasing, and “radical change requires radical ideas”.

The Movement To Decrease Distracted Driving
One idea for change comes from Candace Lightner, founder of Mother’s Against Drunk Driving.  Lightner has formed a new group:  Partnership For Distraction-Free Driving.  That group is gathering signatures on a petition for social media companies like Twitter and Facebook to discourage drivers from multi-tasking.

Another actor in the movement for change is Harvard’s School of Public Health. It orchestrated the ‘designated driver’ campaign in the 1980s and is now working on the Distracted Driving Project.  Professor Jay Winsten hopes the school’s efforts to combat distracted driving are as successful as the designated driver campaign despite the current media fragmentation and the public’s short attention span.

Ohio Laws Prohibit And Punish Distracted Driving
Ohio has both state and local laws prohibiting texting while driving. Some cities, like Columbus, banned texting as early as 2010. The statewide ban went into effect in 2012. According to the state law, a person who texts while driving may be ordered to pay a fine of $150 plus court costs. That punishment does not compare to Ohio’s punishment for a first-offense OVI, which includes a fine of $375 to $1,075, a driver license suspension of one year to three years, and a jail term of three days to 180 days.

Currently, texting while driving is not taken as seriously as OVI in Ohio. Whether the two offenses should have the same punishments is debatable, but clearly there is a problem with distracted driving which needs to be addressed more strictly.

And Then There’s The “Textalyzer”
One controversial idea for change is the “Textalyzer”:  a computer program which could examine a cell phone to determine when and how the phone was used. An officer who arrives at an accident scene or makes a traffic stop could analyze the driver’s cell phone, on-the-spot, for recent activity. The state of New York is considering legislation to suspend drivers’ licenses for refusal to submit to the Textalyzer, similar to Administrative License Suspensions for refusing breath tests.  While it may be an effective tool for uncovering evidence, it may also be a violation of the Fourth Amendment. The legality of the Textalyzer will be addressed in the next entry of this blog.