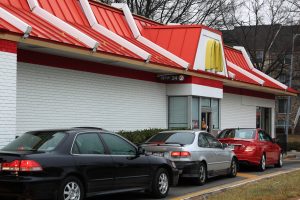 DUI cases (called ‘OVI’ in Ohio) are some of the most complicated cases filed in Ohio courts. From field sobriety tests to breath/blood/urine tests, there are many minute and highly technical details that can make or break an OVI defense in court. Often, a seemingly simple but no less important detail can get lost under the mountain of specialized evidence in OVI cases: why did the person get pulled over in the first place? And, more importantly for OVI defense: what degree of evidence does the prosecution need to present to justify that traffic stop?

The Motion Hearing In The Trial Court
This very issue was the subject of a recent case in the Fifth District Court of Appeals. In this case, the manager of a McDonalds called 911 to report that he suspected a driver in the drive-thru lane was intoxicated. Based on this phone call, an officer with the Powell Police department initiated a traffic stop of the defendant’s vehicle. After the Powell officer made the stop, a Delaware County Sheriff’s Office deputy arrived on the scene and conducted an OVI investigation. The deputy arrested the defendant and charged him with OVI. In court, the defendant filed a motion to suppress evidence, arguing that the traffic stop was not justified.

The prosecution argued that the 911 call provided enough justification for the initial traffic stop. However, the prosecution introduced no evidence that the Powell officer was aware of the content of the 911 call. The defense argued that, without knowing what allegations were made in the 911 call, the Powell officer was not justified in making a traffic stop. After considering the evidence, the judge denied the defense’s motion to suppress evidence.

Review By The Appellate Court
The defendant appealed the judge’s decision to the Fifth District Court of Appeals. The appellate court relied on this proposition of law: “if an officer’s decision to stop a motorist for a criminal violation is prompted by a reasonable and articulable suspicion, considering all the circumstances, then the stop is constitutionally valid.” Applying this proposition to the evidence from the motion hearing, the Court of Appeals found there was no evidence the Powell officer received the information that the defendant was a suspected drunk driver. Therefore, the evidence failed to show the Powell officer had reasonable suspicion to validate the traffic stop. Accordingly, the appellate court reversed the trial court’s decision denying the defendant’s motion to suppress evidence.

The case was remanded to the trial court “for further proceedings consistent with this opinion”. That means the prosecution could go forward, but all evidence obtained after the traffic stop would be excluded from trial. With essentially all the evidence excluded, the prosecution ultimately dismissed the case.

Vindication
In this case, I represented the defendant in the trial court. After careful evaluation of the evidence, it appeared our argument regarding justification for traffic stop was the best path toward a favorable outcome. When I litigated that issue at the motion hearing, I believed the judge should rule in our favor. Although the judge initially ruled against us, the Court of Appeals ultimately vindicated our argument.