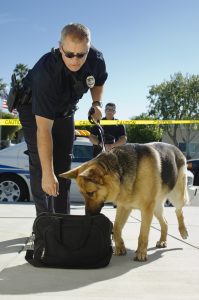 Jamie was driving down the highway with her boyfriend when a police officer stopped Jamie for speeding. It turned out Jamie did not have a driver license, and there was an active warrant for her arrest. The officer put Jamie in the back of his cruiser and placed her under arrest.

Jamie’s purse was still in the car with her boyfriend, and her boyfriend owned the car. The officer decided to retrieve Jamie’s purse from the car and search it. The officer found drugs and drug paraphernalia in the purse, and Jamie was charged with crimes for possessing those items. In this case, State v. Banks-Harvey, the Ohio Supreme Court had to decide whether the officer’s search of Jamie’s purse violated Jamie’s right against unreasonable searches and seizures.

Was This A Valid Inventory Search?
One exception to the search warrant requirement is for ‘inventory’ searches. If a person, like Jamie, is going to jail, officers are permitted to inventory that person’s personal belongings which are with them at the time of the arrest. The search is administrative rather than investigative, so a search warrant is not required. In this case, however, Jamie’s purse was not really with her at the time of the arrest. She was being taken to jail, but the purse was with her live-in boyfriend who could have taken it home, so there was no need for the officer to retrieve it and inventory it. Therefore, the search was not a valid inventory search, so it violated Jamie’s search and seizure rights.

When there is a violation of a defendant’s search and seizure rights, the remedy typically is to exclude the seized evidence from the defendant’s trial. The exclusionary rule is designed to deter police from violating Constitutional rights. There are, however, exceptions to the exclusionary rule. The prosecution argued two exceptions applied in this case: (1) inevitable discovery; and (2) officer’s good faith.

Should The Evidence Be Excluded From Trial?
The ‘inevitable discovery’ rule states illegally obtained evidence may be admitted in trial if the prosecution establishes the evidence would have been inevitably discovered in the course of a lawful investigation. In this case, the Ohio Supreme Court concluded the contents of Jamie’s purse would not have been inevitably discovered because there was no investigative reason to seize and search the purse.

The ‘good faith’ rule is this: illegally obtained evidence is admissible when an officer acts with an objectively reasonable, good-faith belief that his or her conduct is lawful. In this case, the officer testified it was his agency’s standard procedure to transport a purse to jail with the arrested person. However, the officer also admitted he did not need to transport the purse because he could have left it with Jamie’s boyfriend. The Court concluded the officer did not act in good faith because the purse was not on Jamie’s person at the time of her arrest, and there was no reason to retrieve the purse from the car

What Will Happen Now?
The Court held the search violated Jamie’s rights because there was no search warrant, and it was not a valid inventory search. The court further held the evidence would not have been inevitably discovered, and the officer did not act in good faith. As a result, the Court excluded the evidence in the purse from Jamie’s trial. As a practical matter, the case will almost certainly be dismissed.