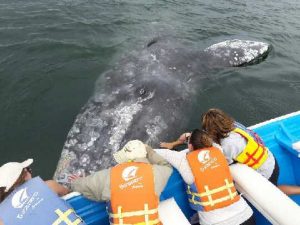 I recently went on a whale-watching trip in Mexico. Wherever I went, there was no shortage of tequila and cervezas. There was also no shortage of people driving cars. That prompted me to wonder how the drunk driving laws in Mexico compare to those in Ohio. It appears there are some similarities and some differences.

‘Legal Limit’ For Blood Alcohol Concentration
One similarity between the laws in Mexico and Ohio is the ‘legal limit’: the blood alcohol concentration at which driving is ‘per se’ illegal. The national limit in Mexico is .08:  the same as Ohio.

Many states in Mexico have created their own limits, and most of them are lower than .08. For example, the states of Chiapas, Hidalgo and Veracruz all have limits of .04. We stayed in the state of Baja California Sur, which has a ‘per se’ limit of .08. Interestingly, I asked a few different locals about drunk driving, and none of them knew the ‘limite legal’.

Enforcement Of Drunk Driving Laws In Mexico And Ohio
There is an old Mexican joke: if you are too drunk to walk to the store for beer, drive a car. Mexico has a history of lax enforcement of DUI laws, as well as a reputation for people avoiding prosecution by paying the fine to police officers on-the-spot. In the last decade, however, there has been increased enforcement of DUI by Mexican authorities.

Mexican authorities have an interesting enforcement method: random DUI checkpoints. At those checkpoints, they stop any cars they choose. When a car is stopped at the checkpoint, the driver is subjected to a breath alcohol test (‘alcoholimetro’). Testing over the limit or refusing the test may result in immediate incarceration. Drivers challenged this in court, but Mexico’s Supreme Court reportedly found this enforcement method Constitutional.

Sentencing For DUI In Mexico And Ohio
The sentence for DUI in Mexico includes a jail sentence of 20 hours to 36 hours and a fine of up to $2,500. For a first offense, points are assessed to the driver’s license. For a second offense within a year, the driver’s license is suspended for three years.

The sentence for a first DUI / OVI in Ohio includes a jail sentence of three days to 180 days and a fine of $375 to $1,075. Points are assessed to the driver’s license and there is a driver license suspension of one year to three years. There are additional penalties possible, including probation for up to five years, yellow license plates, and an ignition interlock device. The minimum mandatory sentence increases with each DUI / OVI conviction within ten years.

Ohioans And DUI In Mexico
As so many Ohioans vacation in Mexico, one good question to ask is whether a DUI conviction in Mexico will affect an Ohio driver license. The Ohio BMV will impose a six-month license suspension for a conviction of any other state or federal law substantially similar to Ohio’s OVI statute. There would be two issues to litigate in Ohio. First, is the Mexican law “any other state or federal statute”? Second, is the Mexican law substantially similar to Ohio’s?

Another good question for an Ohioan to ask is whether their prior DUI/OVI conviction will affect their travel to Mexico. Mexican law prohibits entry into the country of individuals convicted of DUI in the last ten years. The only other country I know of with a similar immigration law is Canada. Ironically, both countries border the United States: the country whose president wants to build a wall for immigration purposes.

Although Mexico is known for its fiesta culture, the police will arrest drivers for DUI. If you are charged with a DUI in Mexico, you should probably contact the U.S. Consulate or the U.S. Embassy (you do not want to be stuck in a Mexican jail!). If you are charged with DUI/OVI in Ohio, you should probably contact an experienced DUI/OVI lawyer. Better yet, just get someone else to drive, wherever you are.