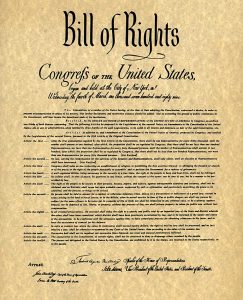 The last post in this blog described how crime lab reports are used in Ohio DUI / OVI cases. In a nutshell: a lab technician issues a report identifying the quantity of alcohol or drugs in a person’s blood or urine, and that report is given to the prosecutor. Ohio legislation requires the prosecutor to provide the report to the defense attorney. Ohio legislation, however, is not the only law impacting the use of these reports. The Constitutions of Ohio and the United States also provide limitations on the use of crime lab reports in Ohio DUI / OVI cases.

Defendants’ Confrontation Rights
In a criminal prosecution, defendants have the right to confront the witnesses against them. This right is guaranteed by the Sixth Amendment to the United States Constitution and Article I, Section 10 of the Ohio Constitution. Confrontation rights clearly apply to statements a witness makes during a trial:  the defendant cross-examines that witness at the trial. But what about statements made by a witness before the trial?

The United States Supreme Court addressed this question in Crawford v. Washington (2004). In this case, the Court held confrontation rights apply to out-of-court statements which are “testimonial” in nature. A statement is “testimonial” if an objective person would reasonably believe the statement would be available for use at a later trial. For example, if a person makes a report to the police, that person’s statements to the police would be considered “testimonial”. According to Crawford, testimonial statements cannot be used in a criminal trial unless the accused has the opportunity to cross-examine the person who made the testimonial statement.

Bullcoming v. New Mexico
The Bullcoming v. New Mexico case (2011) took the Melendez-Diaz holding one step further. In this case, the defendant was involved in a two-car accident and was arrested for DUI (what Ohio calls OVI). He refused a breath test but was subjected to a blood test, and the result was .21. At his trial, the lab technician who performed the blood test did not testify, but another technician from the same laboratory testified about the results of the blood test.

The Supreme Court found this impermissible. The lab tech who testified was basically just relaying the statements from the other lab tech’s report, and those statements are “testimonial”. The Court concluded the lab tech who actually administered the test must testify at trial unless: (1) that lab tech is unavailable, and (2) that lab tech was previously cross-examined by the defendant.

Application To Ohio DUI / OVI Cases
For OVI cases in Ohio, law enforcement uses both urine tests and blood tests. Ohio has a limited number of crime labs and laboratory technicians. Those lab techs perform a high volume of tests. When they are subpoenaed to appear in court, they are sometimes unavailable because they are testifying elsewhere. To effectively advocate for their clients, Ohio DUI / OVI lawyers should be aware of the availability of the laboratory technicians and should also be sure to demand the testimony of the lab tech so the prosecution cannot admit the lab tech’s report without live testimony.