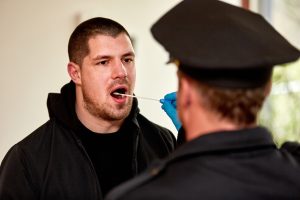 The Need for Improved Drug Testing in Ohio DUI/OVI Cases
Drug-impaired driving has increased, according to the National Highway Traffic Safety Administration (NHTSA).  For drivers involved in crashes resulting in fatalities and serious injuries, NHTSA reports that 56% tested positive for at least one drug.  The drug most commonly detected in the testing is THC (marijuana/cannabis).

Ohio’s current methods of testing for drug-induced impairment have limitations.  Breath tests only measure a person’s alcohol level and do not test for drugs of abuse.  Blood tests typically require a search warrant and a medical technician to draw the blood.  Urine tests involve a same-gender witness, and test results include drug metabolites which do not impair driving ability.  Both blood tests and urine tests involve a crime laboratory to analyze the urine sample and a long wait for the results.

Is Oral Fluid Testing an Improvement?
Oral fluid testing overcomes some limitations of Ohio’s current testing methods.  Drugs of abuse can be detected in oral fluid, and a search warrant is not required to obtain an oral fluid sample.  The sample can be obtained by law enforcement officers of any gender, there is no need for medical personnel, and the test results are essentially immediate.  Oral fluid testing is also cheaper than current drug testing methods.

The reliability of oral fluid testing for other drugs of abuse was not discussed in the NBC4 Columbus report.  It appears the testing method would be immunoassay.  That testing method lacks drug specificity, is subject to cross-reactivity, and may produce false-positive results.  Immunoassay testing is considered to be less accurate than the chromatography method currently used for blood and urine testing.

Perhaps There is a Better Method
The Traffic Safety Council is correct that drugged driving is an increasing problem, and it is wise to seek effective methods for testing drivers suspected of drug-impaired driving.  However, a testing method which is cheaper, faster, and more convenient is not necessarily the best option.  As oral fluid testing is ineffective for measuring THC concentrations, and as oral fluid testing appears to have questionable reliability for other drugs of abuse, perhaps the Traffic Safety Council should continue its research before recommending that Ohio implement oral fluid testing for DUI/OVI cases.