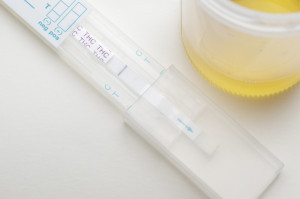 The psychoactive ingredient in marijuana is THC (tetrahydrocannabinol).  THC is what makes a person ‘high’.  Whether smoked or eaten, when THC enters the body, it is broken down (metabolized) quickly, either in lungs or stomach.  When this metabolism occurs, metabolites are produced.  A metabolite is any substance produced during metabolism:  what remains after a drug is ‘broken down’.

There is a distinction between the duration of a marijuana high and the length of time THC metabolites are detectable. There are varying conclusions about the average length of a marijuana high. The National Highway Traffic Safety Administration (NHTSA) marijuana fact sheet reports a range of two hours and five hours.

The distinction between duration of detectability and duration of effects is problematic. Even if marijuana impairs driving ability, it’s only for two to five hours. Tests, however, will reveal THC metabolites in blood for up to 12 hours and in urine for up to five weeks. That means a person could be charged with OVI-marijuana hours, days, or weeks after it stops affecting them. This provokes the question posed at the beginning of this article regarding whether Ohio’s OVI-marijuana laws are Constitutional. That issue will be addressed in a subsequent article in this blog.

*Although the wisdom of passing Issue 3 is not the subject of this article, I do have an opinion on the matter. Regardless of whether marijuana legalization is a good public policy, it should not be accomplished by means of a Constitutional amendment. The purpose of the Ohio Constitution is to provide a framework for the state government and should not be modified to encompass narrow public policies like marijuana legalization. Those policies should be addressed in legislation, not the Constitution.