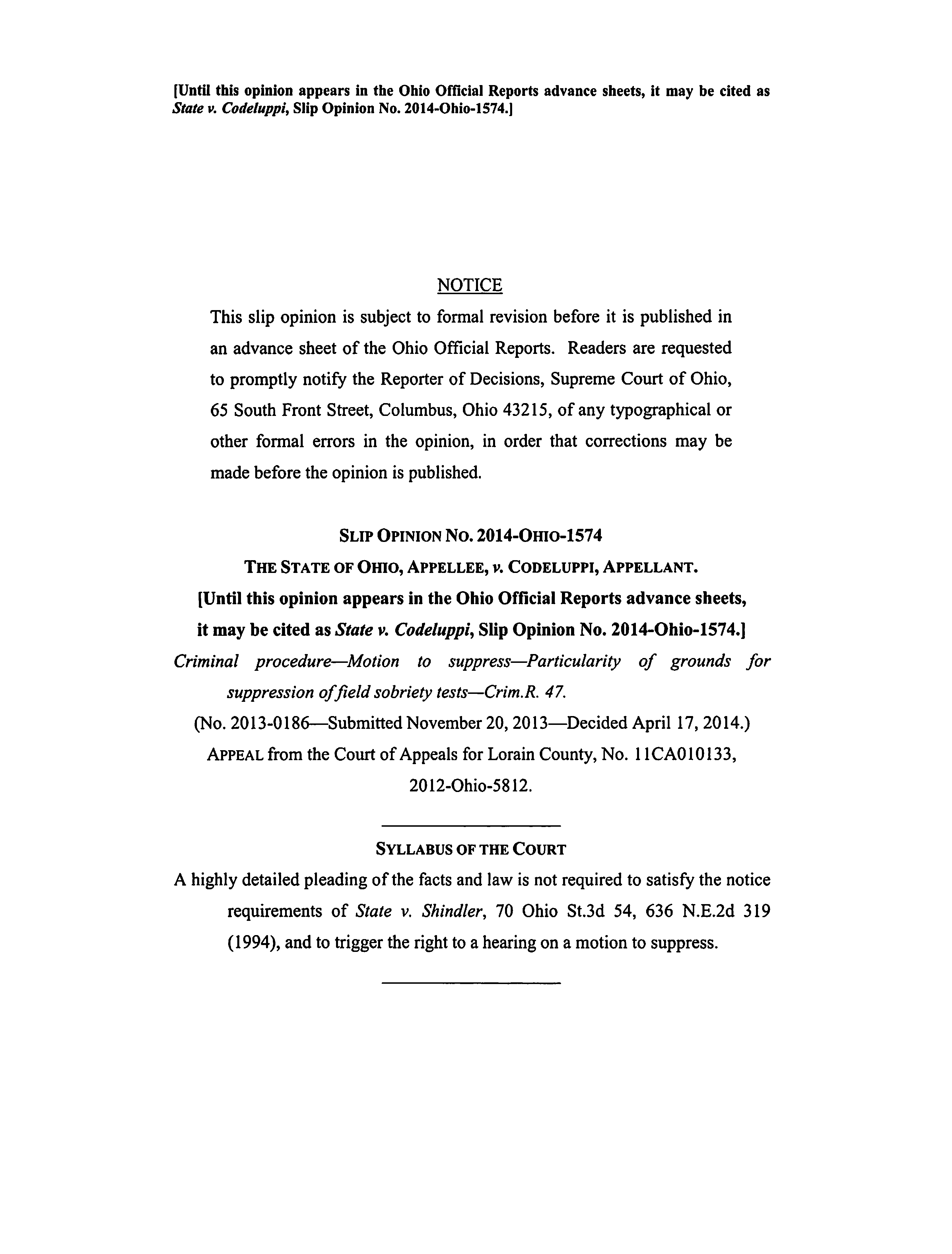 Two days ago, the Ohio Supreme Court issued a decision clarifying how specific a motion to suppress must be for the defendant to receive an evidentiary hearing on the motion. In State v. Codeluppi (2014), the Court concluded: “[A] highly detailed pleading of the facts and law is not required to satisfy the Shindler notice requirements and to trigger the right to a hearing on the motion to suppress.” This conclusion affirmed the Court’s decision from a decade ago in State v. Shindler (1994). The Codeluppi decision hopefully will end uncertainty about the specificity required for motions to suppress in Ohio DUI/OVI cases.

Ohio has a system for drug/alcohol testing and field sobriety testing in DUI/OVI cases. First, government agencies develop methods for alcohol/drug testing and field sobriety testing. Second, those government agencies issue regulations and manuals to ensure the tests produce reliable results. Third, law enforcement is trained to implement the testing methods according to the regulations and manuals.

Ohio law has a framework for uniformly litigating issues regarding the admissibility of evidence in DUI/OVI cases. Rather than addressing the science behind alcohol/drug testing and field sobriety testing in every individual DUI/OVI case, the litigation addresses whether law enforcement complied with the regulations, the manuals, and the Constitution. The prosecution must prove drug/alcohol tests and field sobriety tests were administered in substantial compliance with the regulations and manuals, and the prosecution must also prove the detention and arrest of the defendant were lawful. If the prosecution does not prove these things, evidence is excluded from trial.

With this framework for DUI/OVI litigation, the following question arose: what does a defendant need to do to arrange a hearing on evidentiary issues? There are many possible answers. For example, defense counsel could call or email the court staff and prosecutor to notify them a hearing is requested, or courts could simply schedule an evidentiary hearing in every DUI/OVI case after the defendant pleads Not Guilty. In the 1995 case of State v. French, the Ohio Supreme Court decided defendants wishing to challenge the admissibility of tests in DUI/OVI cases must file a motion to suppress evidence.

If a motion to suppress evidence is the way to challenge DUI/OVI tests, the question becomes: how specific must the motion be? This is the question answered by Shindler and Codeluppi. In Shindler, the Court stated, “[i]n order to require a hearing on a motion to suppress evidence, the accused must state the motion’s legal and factual bases with sufficient particularity to place the prosecutor and the court on notice of the issues to be decided.” In Codeluppi, the Court stated: Shindler does not require that a defendant set forth the basis for suppression in excruciating detail. Instead, the question is whether the language used provides sufficient notice to the state. After all, “[t]he motion to suppress is merely a procedural vehicle to ‘put the ball into play’ and serve notice that the defendant intends to have the state meet its legislatively mandated burden of demonstrating compliance with any and all challenged regulations and requirements.”

Whether a motion to suppress is ‘sufficiently particular’ has been the subject of ongoing debate in DU/OVI cases. In a motion hearing for one of my recent cases, the prosecution did not have the witnesses necessary to prove compliance with regulations. The prosecution claimed I ambushed them the lack of particularity in my motion to suppress (right…I ambushed them with the law which has been in place for nearly 20 years!). While this was an isolated occurrence in my practice, I have observed ongoing uncertainty among lawyers and judges regarding the degree of particularity required in motions to suppress. The Codeluppi decision hopefully will put that uncertainty to rest.