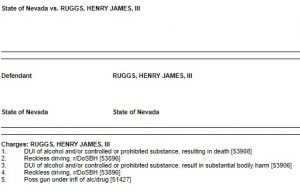 What sentence is Henry Ruggs III facing?  The (former) wide receiver for the Las Vegas Raiders was recently involved in a collision which killed one person and injured another.  He was charged with multiple offenses, including the Nevada equivalents of Aggravated Vehicular Homicide and Aggravated Vehicular Assault.  The Ruggs incident may leave inquisitive Ohio residents wondering what the potential sentences are for Vehicular Homicide and Vehicular Assault in Ohio.  If you are one of those inquisitive Ohio residents, you need not wonder any longer.

The Charges Against Ruggs
According to ESPN.com, Ruggs was driving his Corvette at 156 mph before he rear-ended another vehicle on a Las Vegas street.  A blood test showed his blood alcohol level was .161%.  The driver of the other vehicle was killed, and the passenger in Ruggs’ car suffered a severe arm injury.  Ruggs is now charged with five offenses:  DUI Resulting in Death, DUI Resulting in Substantial Bodily Harm, Reckless Driving (two counts), and Possessing a Gun Under the Influence.

This is a rough summary of the possible incarceration for these Vehicular Homicide offenses.  The specifics of the possible sentence are much more complicated.  The specifics are explained in more detail in the Ohio Vehicular Homicide Guide.  The paperback and Kindle versions can be purchased on Amazon, and the PDF version can be downloaded for free from the Dominy Law Firm website.

Sentencing for Vehicular Assault
In Ohio, ‘Vehicular Assault’ is a generic label for offenses in which an individual’s driving causes serious physical harm to another person.  There are three separate offenses in Ohio, and each offense has distinct sentencing.

The sentences for vehicular assault offenses, like those for vehicular homicide offenses, are complex, and what is provided here is just a summary.  Details about sentencing are explained in the Ohio Vehicular Assault Guide, which can be purchased on Amazon or downloaded for free from the Dominy Law Firm website.

If The Ruggs Case Were in Ohio
Ruggs is charged with both DUI Resulting in Death (Aggravated Vehicular Homicide) and DUI Resulting in Substantial Bodily Harm (Aggravated Vehicular Assault).  If he were convicted of both offenses in Ohio, he could be sentenced to 13 years in prison and subjected to a lifetime driver license suspension.  The prison term could be increased to a maximum of 17 years by the Ohio Department of Rehabilitation and Correction for certain misbehavior in prison.  Ruggs is also charged with Possessing a Gun Under the Influence (Improperly Handling Firearms), which could add one year to his prison term.